For the last seven months, Bleeding Cool has been reporting on something called 5G.

That it would be the fifth Generation on the DC Comics Timeline. That it is part of the Timeline being radically changed, and the original Superman, Batman, Wonder Woman etc suddenly being a lot older than they have previously been portrayed.

And as a result, a number of characters stepping up to fill their shoes. That Wonder Woman would be the first to be replaced. Jonathan Kent, son of Clark Kent and Lois Lane, to be the new Superman. That Bruce Wayne was to be replaced as Batman with the current Batwing – Luke Fox, son of Lucius Fox and be written by 12 Years A Slave's John Ridley IV. That Captain Boomerang's Kid would replace Barry Allen (and Wally West) as the Flash. That Jo Mullein of Far Sector would replace Hal Jordan as the Green Lantern. That the planned Earth One Aquaman was being repurposed by Francis Manapul for 5G.

And that it will kick off with both a new Convergence-style Band-Aid to help creative teams get ahead of schedule, as well as a brand new Crisis for 2020.

Yesterday, Doomsday Clock #12 laid out the reality of the DC Universe – with the current version, whatever it is, being the Meta-Verse. Until it changes, and the old version then becomes a separate reality – and one that can be revisited – even as the DC Universe soldiers on.

So after every reboot or partial reboot, an Earth of the previous era is created in the multiverse, born from the metaverse and in some cases named after that era. So when the Silver Age began, Earth-2 was born, representing the Golden Age. After the Crisis on Infinite Earths, as reality changed again, Earth-1985 was born, representing the Silver Age. It's a world we haven't seen since, but it's out there. Oh, and may explain this back cover from DC Rebirth… 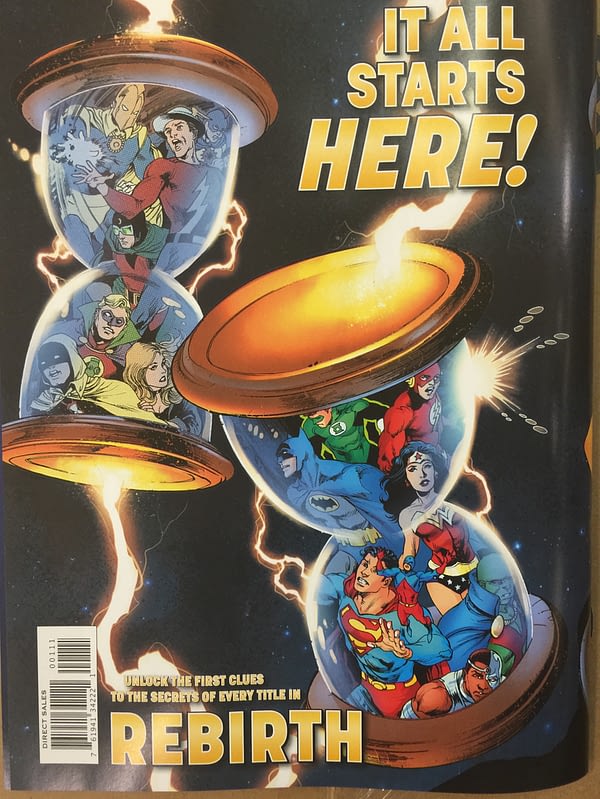 At the beginning of Rebirth, when things changed again, Earth-52 was born preserving that era. And 5G is coming in 2020. But the 5G era will end — and when 5G ends — Earth-5G will be born as the metaverse continues to the next era. And so on and so on. Doomsday Clock dates that as 2026, but it could be anywhen.

So what do we know about 5G?

5G is the name of the new initiative in 2020 from DC. It is the next "reboot" of DC as crafted by Dan DiDio. In which the characters of the DC Universe get older, more in line with their history and the new DC Timeline rolling out, and some are replaced by new versions.

And so Luke Fox will be Batman. Jonathan Kent will be Superman. A child of Captain Boomerang becomes the new Flash. Jo becomes the Green Lantern of Earth. It is notable that both a Luke Fox Batwing-Batman, and Green Lantern Sojourner "Jo" Mullein appear in this page for Doomsday Clock #12, which looks at reality being warped again in 2020, 'bombarded by the reckless energies of the old gods'

And from the above, it is possible that Nubia will be the new Wonder Woman of 5G. But as the comic book points out, one day this will end, when Clark and Bruce are back in the leads and no longer old men. Because they will be back. They always are. And Doomsday Clock #12 shows you why. And possible when – 2026.

But in the meantime, the adventures of Bruce Wayne, Clark Kent, Diana etc will continue in a line of books half-way between the Walmart Giant books and the Black Label line, outside of current DC Continuity but in their own shared continuity line. But the others will all be their respective heroes on Earth-5G, which can always be revisited…

One thing to remember, when Doomsday Clock began, Geoff Johns was CCO of DC Comics. Now he is a freelance writer for DC Comics. His influence is much less now – but it was approved back then.  Not everything planned back then has come to pass. Changes were made along the way. Including bringing in 5G…