IDW's Teenage Mutant Ninja Turtles comic is heading toward its 100th issue, an amazing feat by modern comic book standards, but the publisher isn't saving all their shocking moments for that milestone issue (though we're on the record as predicting the return of Oruku Saki for that big event). In last week's TMNT #95, IDW debuted a new female turtle, Jennika.

Jennika, working as second-in-command under Splinter, was stabbed in the gut by Oruku Karai as part of a struggle for control of the Foot Clan in the City at War storyline. When Karai's forces prevented the Turtles from bringing Jennika to a hospital, they took her to an underground medical facility and used an experimental treatment to save her life: injecting her with mutagenic ooze and a blood transfusion from Leonardo. What happened next was enough to send prices soaring for TMNT #95 on eBay. 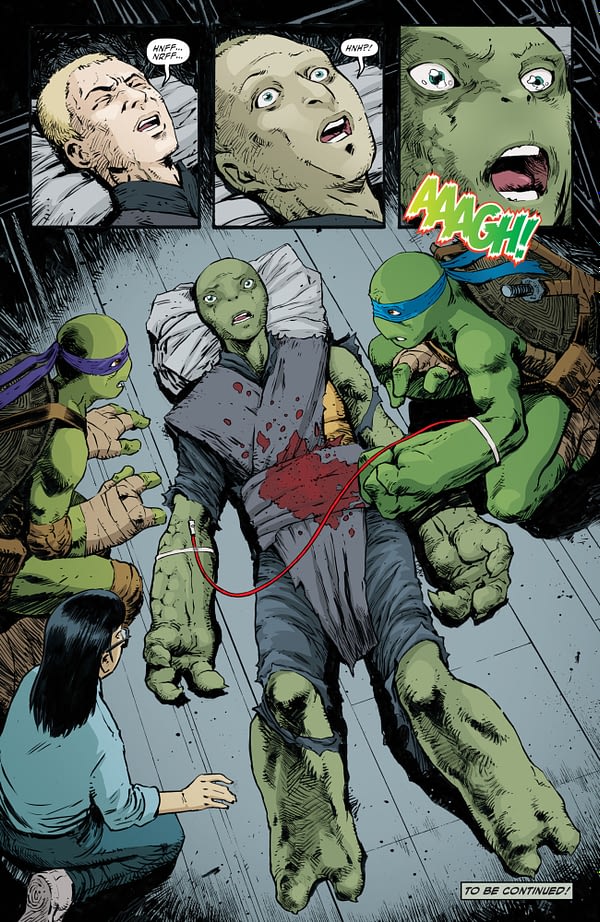 It looks like plans were in the works for a long time to make Jennika a mutant turtle, as Sophie Campbell took to Twitter this week to share two-year-old concept art showing what Jennika may look like when she dons a yellow eye mask and officially becomes part of the fearsome… fivesome?

Cat's out of the bag now, so here's some concept art I did two years ago (can't believe it's been that long) for mutated Jennika, the new Turtle!! @TomWaltz @thedisastrix @IDWPublishing pic.twitter.com/FtrJsK9Deb

If you're not reading IDW's TMNT series, you're certainly missing out on a lot, but it's not too late to jump in before the book hits triple digits. TMNT #95 is in stores now, and TMNT #96 hits stores in just a few weeks.

TMNT ONGOING #96 CVR A WACHTER
MAY190564
(W) Tom Waltz, Kevin Eastman (A) Michael Dialynas (CA) Dave Wachter
"City at War, Part 4." As the war for New York reaches a fever pitch, Splinter makes his final gambit for complete victory. Meanwhile, the Turtles are on the run and may not be able to count on each other for survival! The start of Act 2 of "City at War"!
In Shops: Jul 31, 2019
SRP: $3.99