Meanwhile, Smoothie (Patrick Fischler) made the case that he might be the most "parental" person in Hailey's (Bryce Lorenzo) life. Sonny makes the case for his vision of "Easter v2.0" in front of a "captivated" audience, while Amanda's (Medina Senghore) been letting her freak flag fly a little too much lately and Blue (Ritchie Coster) made a move to consolidate power – and make up with Big Pink (Paul "The Big Show" Wight).

And let's not forget (not like we could)… Sax fought his own poop.

What follows are two sneak previews for this week's episode "17 Hours and 13 Minutes": in the first clip, it looks like Amanda's got a new boyfriend – and a nasty new habit; while in the second clip, we might be witnessing a possible hook-up between Happy and Bo Peep (Jamie Elizabeth Kelton).

Let that image roll around in your head…

Happy! season 2, episode 5 "17 Hours and 13 Minutes": Sax eats the jelly and trips B, D, all of it, and all on Hailey's birthday; Amanda makes a breakthrough.

If that wasn't enough to twist your minds just a little more (we knew there was a reason why we liked you), here are some preview images to help add to the anarchy and confusion:

Season 2 begins with Easter on the horizon –a season of hideous pastels, dye-stained fingertips and a general "who really gives a f***" attitude. A newly sober-ish Sax finds himself struggling with the demands of family and fatherhood. He has sworn to do right by his ex-wife, Amanda, and his daughter, Hailey, which means no booze, sex, drugs or killing.

Happy, meanwhile, is resigned to keeping his partner on the straight and narrow while coping with the fact that a maturing Hailey can no longer see him. Sax's fresh start will be tested by a familiar enemy: Sonny Shine, who is on a mission to Make Easter Great Again (MEGA) with the help of his demented Easter Bunny henchman. 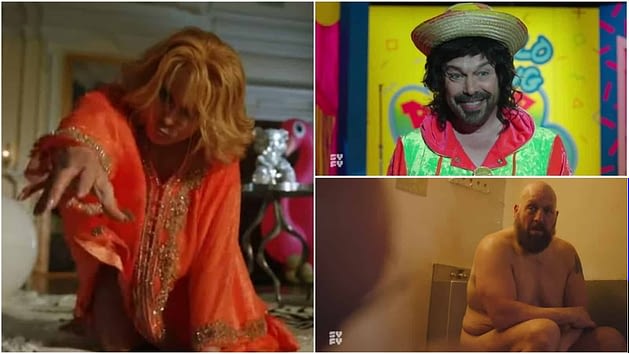 'Weird Al' Yankovic is set to voice Smoking Man Baby: toxic masculinity in a diaper, Smoking Man Baby is a jealous, volatile baby blowhard with full tats and a cigarette always dangling from his mouth.