Recently in Superman, a reunion between Jonathan Kent and his parents was marred by the unnerving fact that he suddenly grown from a child to a teenager, all while taking a nice space vacation with his grandfather, after Jon found himself trapped in a volcano prison by Ultraman, the evil version of Superman, in the dimension of the Crime Syndicate for seven years. And with the Crime Syndicate’s Superwoman, the evil version of Lois Lane, about to murder Jon at the end of last issue, Jor-El arrives just in time to save the day, with a big honkin’ Liefeld gun, in Superman #10 by “The Great One” Brian Bendis, Ivan Reis, and Joe Prado… 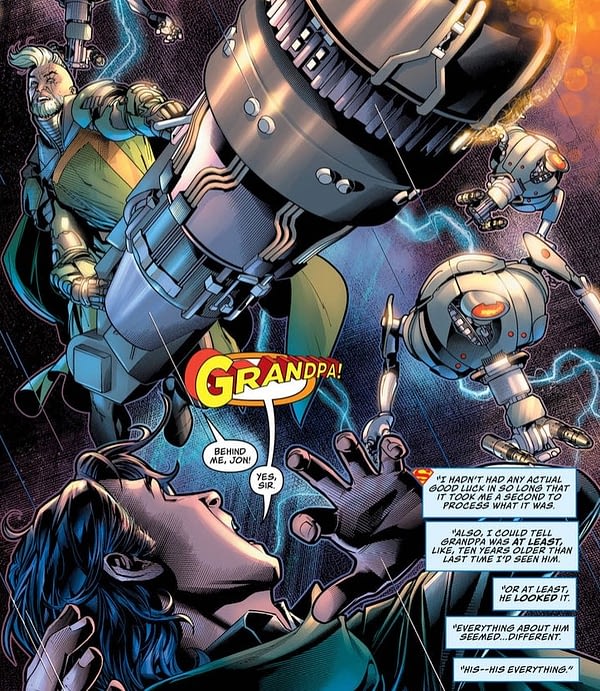 That’s right, folks, Rich Johnston is otherwise occupied today, ejected from Britain with hopes of destabilizing the European Union so that Theresa May can get a better Brexit deal, which means it’s up to Good Ol’ Jude Terror to write your Wednesday spoiler articles. You have been warned.

Anyway, after making their escape, however, Jor-El seems less than pleased with Jon, having apparently spent a lot of time and effort searching for him.

But in his desperation, it seems Jor-El may have done some things he regrets. Or more specifically, made some deals.

Uh oh, that doesn’t sound good. But deals with who? What did you do, Jor-El?!

Unfortunately, Jor-El doesn’t have a chance to explain, because their Millennium Falcon is attacked, and then…

Yeah, that’s not good. As we know, of course, Jon made it back home alive to his parents… but now it looks like father and son will need to team-up to rescue grandpa… and have a very frank conversation with him as well. He’s got some ‘splainin’ to do.

Superman #10 is in stores now.

Superman #10
(W) Brian Michael Bendis (A/CA) Joe Prado, Ivan Reis
Superman and Superboy venture forth into the cosmos to stop Jor-El before he tips the galaxy into utter chaos. Also, Superman would like to have a word with his father about what happened to his son. All this and the fate of General Zod. “The Unity Saga” continues in the pages of SUPERMAN, named one of the best superhero comics of 2018 by Paste magazine!
In Shops: Apr 10, 2019
SRP: $3.99