Thanks to NomadicJaguar64 for pointing this one out. From an interview jn 2008 with then Executive Editor Dan DiDio of DC Comics talking to their media partner Newsarama about those plans for the Fifth World, something we talked about yesterday.

And they sound very, very familiar. He is quoted as saying,

The DC Universe is built upon legacy and generational heroes. This is one thing we’ve always known – we’ve watched Flashes, Green Lanterns, Hawkmans, Atoms, and even in some senses, Aquaman – we’ve watched the generational aspects, and watched these heroes change, grow and evolve over the course of time. You can identify the passage of time in how these characters have evolved. There’s a very clear period of time that was established with the first generation of heroes – Alan Scott and Jay Garrick. Then you have the second generation – Barry Allen and Hal Jordan, and then you have the third generation, Wally West and Kyle Rayner. They’re very clear interpretations with very clear periods of time. But once consistency that has always remained through their periods of time have been Superman, Batman and Wonder Woman. Superman has always been Clark Kent, Batman has always been Bruce Wayne, and regardless of how the world ages around them, they continue to not age. We reboot them rather than show the generational progression of their story.

In this particular case, we want to show the generational progression of their story. This is our opportunity to apply the logic of the growing and changing DC Universe to our three primary characters. So as other things seem to be solidifying with the most clear, iconic interpretations, our three most iconic characters are going through their generational turn, and at some point, this will all synch up and show us the clear and true DC Universe.

What I’m looking at is that as the New Gods are entering the Fifth World, the DCU is entering its fifth generation of heroes, so there is a parallel between how the New Gods have changed, as well as how the overall DC Universe has changed as well…. people can try and figure out how the generations break down, but it’s very clear in my mind – but very accordion-like in its nature. Some periods are reflective of much longer gaps of storytelling than others.

And twelve years later, DC Comics Publisher Dan DiDio is putting those plans into place. With the DC Timeline and fifth generation of heroes – welcome to 5G. 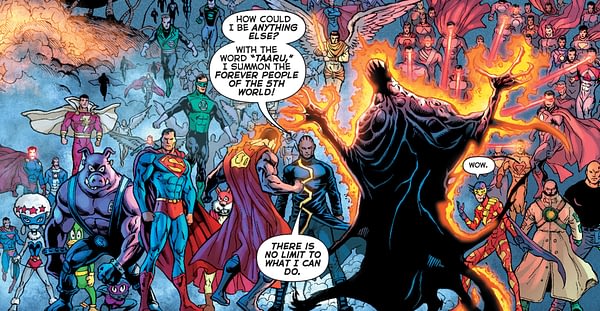