We ran an article like this for Superman #14, out last week. Forgive me if I repeat myself, as Supergirl #33 is published today. Again. Now with added Snickers ad, a new cover and… a couple of other changes.

Once upon a time, DC Comics demanded that comic stores destroy any copies they had received of Superman #14 and Supergirl #33, featuring the first appearances of the rebooted Legion Of Super-Heroes. They also had postal workers rip copies out of packages going to stores, causing an increase in damages in other titles that week. And offered to pay freight costs for those signed an affidavit stating they had destroyed them. DC also went after the eBay accounts of anyone selling copies online to determine which stores were selling copies. DC Comics had never issued such an extreme recall before.

The reason DC Comics gave was that the covers no longer reflected the interior pages and the banner DC's Year of The Villain did not apply to the stories inside. Though no one noticed this before they were printed. Catwoman #14 also out that week had a cover and a YOTV banner that didn't reflect the story inside but no recall demand was made of it.

Bleeding Cool had a tip-off that it was to do with the racial and ethnic make-up of a few members of the Legion. And there were certainly disparate versions, on covers, in designs, on spreads shown on Late Night With Seth Meyers. It appeared that decisions made by senior editorial were not carried out by the Superman group editorial, or that decisions made had not been approved up top, and the recall was a way to show them who was boss. Whatever changes the Superman group at DC Comics would make, senior editorial could rescind, even if the books had been sent out to comic stores already. It was all power play and internal politics.

Then Bleeding Cool posted what we did. Others followed suit. And suddenly you had a Streisand Effect as sales boomed on eBay. And DC Comics, committed to reprinting Superman #14 and Supergirl #33, were suddenly shy of the attention. The different versions of the Legion had been highlighted. And so senior editorial had to go along with what the Superman group had decided after all. And so the comics were reprinted with a new cover but no other changes.

Okay, not quite. Something, other than adding a Snickers ad, had to change to justify the immense cost of a recall and reprint. And yes, it's a colour change but not a colour switch.

Here are the two versions of the big Legion Of Super-Heroes spread from Supergirl #33, republished today. Firstly, the one published three weeks ago and then recalled. 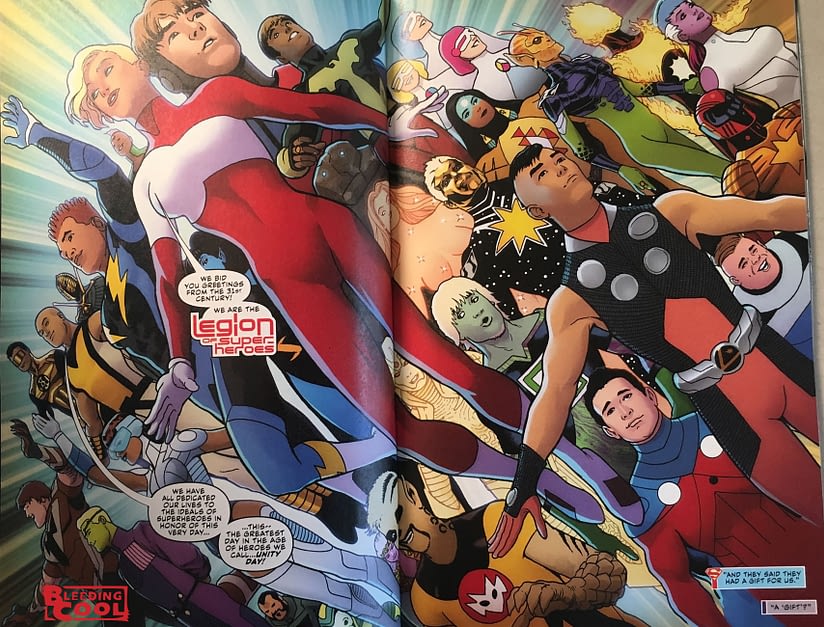 And the one published today.

Lightning Lad's skin colour has been significantly darkened. Before…

He's not alone, either. Not just Bouncing Boy. We have another before…

And maybe just to show how hurried they were getting this to print, a little

This does put the lie to DC's claim that the recall, pulping, affidavits and reprinting was all over an inaccurate cover. Stuff went down. They had to make some chance because of the recall. Even if the change they were originally going to make, they can't make anymore. But they have to do something. And this is it.

And as I pointed out before,  the seven employees DC Comics had to drop earlier in the year? This recall and reprint could have paid one of their salaries for a year. Easy.

Superman #33 is published (properly) today. Superman #14 was out last week.

SUPERGIRL #33 YOTV DARK GIFTS
(W) Marc Andreyko (A) Eduardo Pansica, Julio Ferreira (CA) Kevin Maguire
After a year in space solving the mystery of Krypton's demise, Supergirl returns to Earth to discover that everything she knew as Kara Danvers is gone! Plus, the usurper Brainiac-1 has set his sights on the unsuspecting Girl of Steel-and his plans are far from benevolent! In Shops: Sep 04, 2019 SRP: $3.99

SUPERMAN #14 YOTV DARK GIFTS
(W) Brian Michael Bendis (A/CA) Joe Prado, Ivan Reis
Lex Luthor is back in Metropolis–and he's ready to wreak havoc! First stop, the most dangerous woman in the DC Universe: Lois Lane! Alone, her family a galaxy away, will Lois be tempted by Apex Lex's offer? What does Lex have that this reporter can't turn away from? Don't miss this shocking new twist in the Superman mythos!In Shops: Aug 28, 2019
SRP: $3.99