Once upon a time, in July 2001, Peter Milligan and Mike Allred revamped the comic book series X-Force in a way that had never been seen before for a popular mainstream superhero comic book title. The comic which had begun as a Rob Liefeld project with everything one might expect from a Rob Liefeld project before he left to start Image Comics, was then continued in a variety of forms but all of them continuing the story of black-ops-ish mutant forces doing the kind of job that others wouldn't do.

Pete Milligan and Mike Allred's version looked and smelt completely differently, as radical as Grant Morrison and Richard Case's Doom Patrol ever was. It was a superhero team with pop art sensibilities, a concept of media strategy and a book in which everyone kept dying. And occasionally coming back from the dead. It lent on Milligan's more surreal comics history, such as working with Brendan McCarthy on Skin, Chris Bachalo on Shade The Changing Man or Jamie Hewlett on Hewligan's Haircut, while Mike Allred's sensibilities have roots in sixties superheroing, but took on far more surreal pathways to the present day.

A number were gay, a number dated, and this only underlined the headlineability of the original team and parodying itself for that.

And just as New Mutants was taken over and revamped as X-Force, so after a year or so, X-Force was revamped and became X-Statix with a new #1.

I mention all this because Bleeding Cool has come along some sketches from Mike Allred that seem to have a certain X-Statix flavour. And digging around I am told that, yes, X-Statix are indeed returning very soon to Marvel Comics in a very recognisable fashion. And these are a first glimpse at new X-Statixers to come.

Jordan White already asked in a tease last month, 'didn't they all die'? Yes, Jordan, they did. Repeatedly. But these are new X-Statixers. Although it seems it may have some of the old members as well. 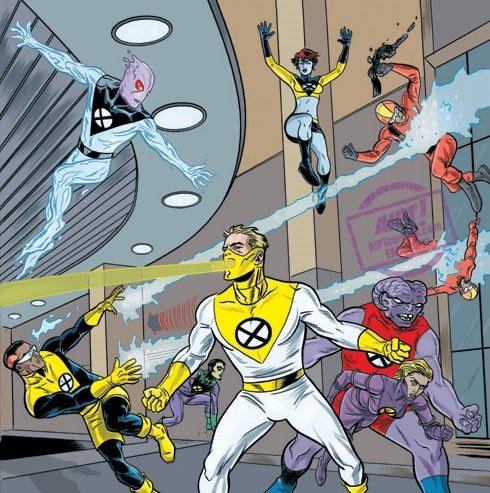 The original team created by Peter Milligan and Mike Allred, first appears in X-Force #116, taking the name from the inhabitants of the comic book previous to that but with a very different cast. Who all died pretty much instantly and replaced by yet another cast.

The series became X-Statix in 2002 and relaunched, upping the satire on other superhero comic books. But it was the introduction of one character, Princess Diana, planned to return from the dead as a mutant superhero which caused the biggest uproar. And I was partially to blame, in that the Daily Mail read it on my Lying In The Gutters column, ran a series of articles inflaming the situation claiming that the British royal family were incensed (they weren't, it hadn't reached them) but it was enough for the likes of  Elton John to contact the Hollywood side of Marvel Comics to express his displeasure and, eventually, changed were made to the comics. This was also the beginning of Bill Jemas being excised from Marvel as its publisher. I mean, George Clooney pulling out of playing Nick Fury after his people read Garth Ennis' foul-mouthed revamp comic Fury for Marvel's MAX line probably didn't help either. But still.

Instead, Dead Diana became pop star Henrietta Hunter, brought back to life and part of the team. But the damage had been done, it seems.

And after over forty issues together, the book was cancelled in 2004, Milligan and Allred killed them all off one last time. Only to bring a few of them back one last time, four years later in X-Statix Presents: Dead Girl which parodied how superheroes are brought back from the dead.

Also, while X-Statix member Doop was paraded in a parody fashion as a 'new character find', a green blob that floated in the air and videoed everyone, he would become the longest lasting of the X-Statixers, regularly appearing in X-books today and even getting his own series. No one, not even his creators, thought he would last that long.

But now it looks like they are back again – or at least the sensibility has returned… no one tell the Daily Mail, okay?

We'll see what else we can dig up.

The teams included Anarchist, the team's self-proclaimed "token" Black Canadian, who could fire acidic sweat energy bolts, Bloke, a mutant with the ability to change the color of his skin, and turning pink would enhance his strength, Dead Girl, who could reform her body and control its parts when dismembered, and could "read" memories of the dead, Doop, a green, floating spheroid creature and cameraman, El Guapo, a sexy male mutant with a sentient flying skateboard, Henrietta Hunter, a reanimated woman with enhanced physical abilities and empathy, Mysterious Fan Boy, greatest fan of X-Statix, Orphan who had limited reality-warping powers, Mister Sensitive, with heightened senses, superhuman speed, and the ability to levitate, Phat, who could harden, soften and increase the size of any part of his body by expanding his subcutaneous fat layer, Saint Anna, an Irish-Argentinian mutant with the ability to levitate and control the motion of objects as well as physically and mentally heal others, Spike, who could extend thin spikes from his body, launching them as projectiles, U-Go Girl, a blue-skinned, redhead, narcoleptic teleporter, Venus Dee Milo, whose body was made entirely of crackling red energy that allowed her to teleport, project concussive blasts of energy, and heal minor wounds and Vivisector, a bookish scholar who could transform himself into a wolf-like creature with enhanced senses, speed, agility, and razor sharp fangs and claws.

Which of these will return?