At New York Comic Con, Tom King told Den Of Geek about his then-planned ending to Batman, “I think I still might do a scene. I really want to do a scene with Batman and Kite Man in a bar, just drinking beers. At Porky’s bar, of course. I had a big debate, should it be in Porky’s or Batburger? I was like, ‘They’ll have some beers.'” Batman first met Chuck Brown, Kite Man, in a bar, back in Batman #27.

In the new issue, Batman #84, we saw that the Thomas Wayne Batman killed Kite Man in his reality. As well as Bane, but we mostly cared about Kite Man. 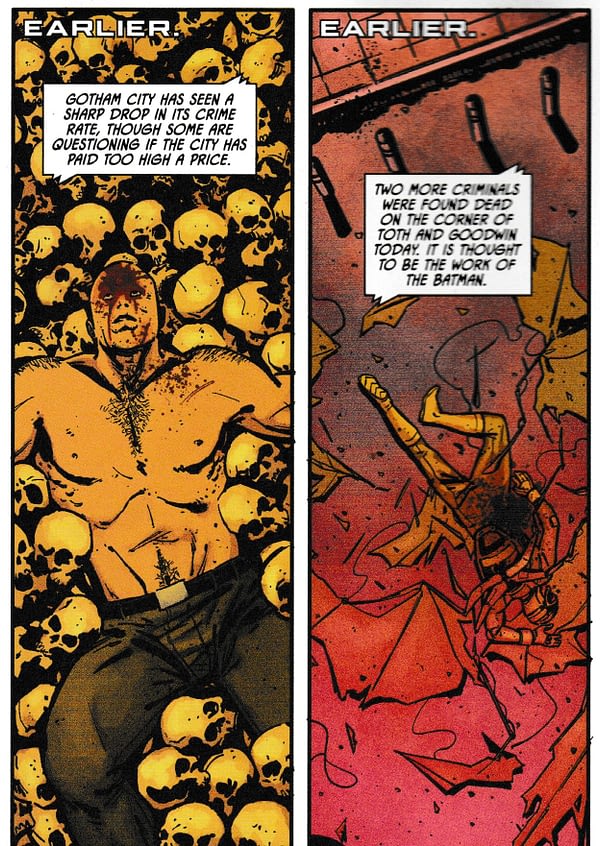 But with one issue left to go, would Tom King go with his gut, or would he save the Kite Man coda for Batman/Catwoman. It seems not. He released the following page of artwork by Mikel Janin from Batman #85. Batman and Kite Man in Porky’s, the bar he created for the Batman/Elmer Fudd crossover, which he also integrated into the continuity of his run… or rather Bruce Wayne and Chuck Brown…

You’ll miss him when he’s gone. Batman #85 is out on December 18th along with everything else.

BATMAN #85
(W) Tom King (A) Mikel Janin (CA) Tony S. Daniel
The stunning conclusion to “City of Bane” is here! How will Flashpoint Batman be vanquished from our dimension? What will become of Gotham Girl now that she’s betrayed all she knows? How will the Bat team cope without Alfred? Will Catwoman stick around? Who will rebuild Gotham City? Is Batman ever going to be Batman again? The event of the summer now closes out the year, setting the stage for a whole new path for the Dark Knight Detective. You don’t dare miss the extra-sized concluding chapter to Tom King’s epic run on Batman-and it all leads to the new Batman and Catwoman series!In Shops: Dec 18, 2019
SRP: $4.99