Batman #75 has landed, written by Tom King, with art by Tony Daniel, Mitch Gerads and Jordie Bellaire, and there’s… well, a lot to digest. Trust me, you’ll want to read until the end; I’m going to make it worth your time.

When we last left Bruce Wayne, he was prisoner to Flashpoint Batman – his father, Thomas Wayne, but from an alternate timeline where Bruce died in Crime Alley instead of his parents. This Thomas Wayne is now alive in the primary DCU timeline thanks to Dr. Manhattan’s seemingly limitless power to manipulate reality (See: “The Button”). Thomas, now in league with a vengeful Bane, had abducted Bruce, exhumed the corpse of Martha Wayne (his wife, Bruce’s mother), and brought them both to one of Ra’s Al Ghul’s restorative Lazarus Pits in an attempt to reunite the family. Bruce managed to secretly escape, burying Martha’s body somewhere in the desert, and then he fought his father deep within the Pit. The very last image in Batman #74 was the gauntlet of the victorious Batman as it emerged: but which Batman?

Batman #75 sees the world of Gotham City gone topsy-turvy. An unknown amount of time has passed, noted only by the opening caption “Later.” Bane has performed a total coup, seizing control of every facet of the city’s infrastructure; Hugo Strange is his police commissioner, Joker and Riddler are his top cops, and Thomas Wayne is his Batman.

Thomas has once again made Wayne Manor his home. Arnold Wesker, The Ventriloquist, serves as this Batman’s butler, and Gotham Girl as his ward. Thomas keeps Alfred Pennyworth hostage in the mansion, at least partially to keep Batman’s extended network of allies at a distance. We see him patrol his beat, as Hugo Strange sets him on course to corral any remaining villains who have yet to submit to Bane. Thomas Wayne is the Batman that leads this title for the entire milestone issue.

We do, however, briefly catch up with Bruce; while Bane’s Gotham pulls you through the looking glass in grand fashion, these quiet bits with an uncostumed Bruce Wayne are the subtle clues that we really ought to be paying attention to. Bruce has climbed a snowy mountaintop in an attempt to visit The Memory Of The Mountain. Readers might remember a noticeably older Bruce telling a story to an older Selina Kyle about this character within the pages of Batman Annual #2:

Bruce and Selina have been in an argument since Batman #15 about how they first met each other. Bruce seems to recall first encountering a disguised Catwoman on a boat, where she stole a diamond and Batman recovered it, but Catwoman got away. This memory is a recollection of Batman #1 from 1940 – the first time they ever met in the pre-Crisis continuity. The diamond carries extra importance because, as revealed in Batman #24, Bruce afterward purchased that diamond.

Selina is describing Batman #404 from 1987 – the first time that Batman and Catwoman met in the post-Crisis continuity, the first issue of Frank Miller and David Mazzucchelli‘s iconic Batman: Year One.

So when future Bruce is telling future Selina about training to memorize his senses forever within the pages of Batman Annual #2, and how it was The Memory Of The Mountain who taught him how to remember things forever, he’s trying to prove the point that he isn’t misremembering how they met. He couldn’t possibly. And here he is in Batman #75, at his lowest moment, trying to find answers from The Memory Of The Mountain. Only Bruce is out of luck, because an adept is there to inform Bruce that The Memory Of The Mountain is no longer among the living. And then the adept attacks Bruce, slashing his throat, leaving him to die in the snow. It turns out that Magpie got to Mr. Mountain first, as part of her plan to recapture Bruce and sell him back to Bane.

But Selina was tracking her missing love all along, and she finds him there dying in the snow. Bruce, barely coherent, naked, bleeding:

In standard Year Of The Villain format the end of the issue sees a holographic Luthor looking to parlay with an already-victorious Bane. Luthor knows that Bane possesses one of the most powerful artifacts in the history of the DCU – Psycho-Pirate and his mask. An artifact so powerful that after Crisis On Infinite Earths, Psycho-Pirate was the only living soul who remembered the pre-Crisis continuity. They come to the terms that as long as Bane never uses the mask to challenge Luthor or his ambitions of multiversal domination then Luthor, now in control of the US government, will allow Bane’s dominion over Gotham to go unchallenged.

Luthor believes that Bane is settling for far too little, and Bane believes that Luthor is attempting something too large and that he will ultimately fail, like all other multiversal threats have. But more than that, Bane knows something is coming – a threat so ominous that it makes even multiversal domination seems like a shortsighted goal:

He has Psycho-Pirate and his mask. He would know.

A Crisis is coming to the DCU, and it’s not a Crisis of emotions in a farmhouse in Nebraska. I must warn you that every word beyond this sentence is speculation, but I have a strong feeling about this.

For 75 issues, time has been even more of a threat in Tom King’s Batman than Bane has been. Memories of conflicting continuities; a future timeline where Bruce and Selina marry and live to old age, in Batman Annual #2. A future timeline where Bruce dies at the hands of Gotham Girl, as narrated by a future Gotham Girl herself at the end of Batman #5. A past where Batman buys a diamond that becomes an engagement ring. A past where he doesn’t. 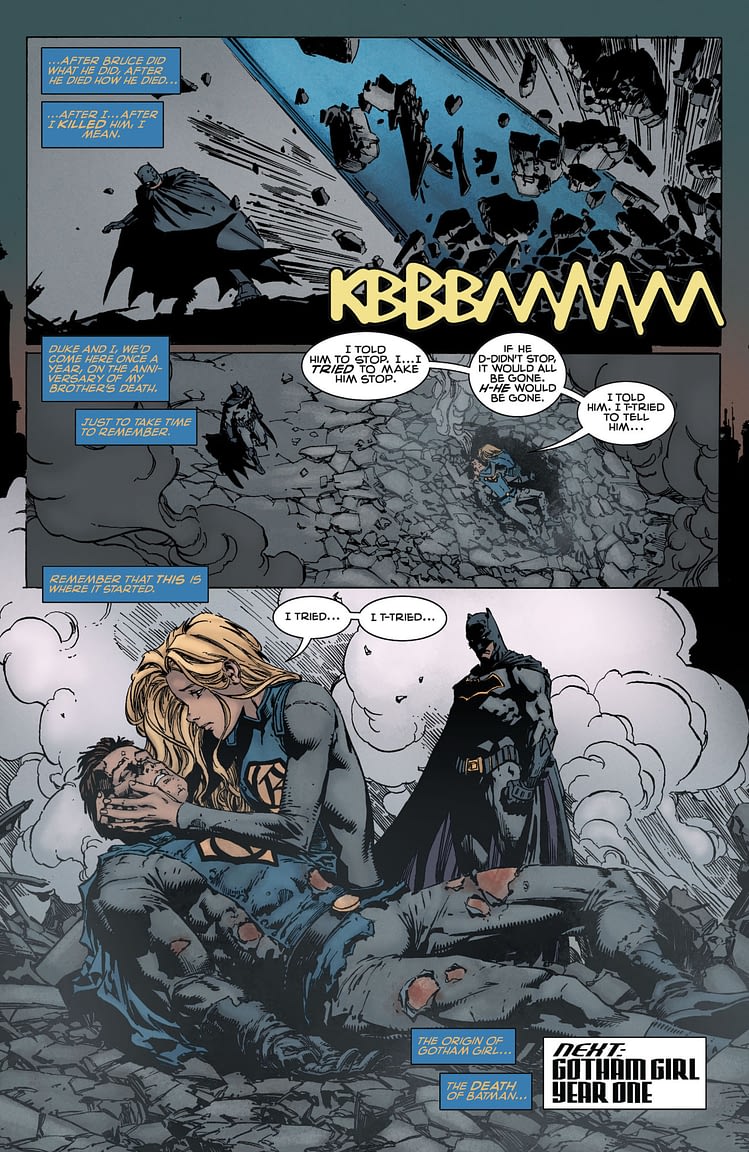 And meanwhile, there is Dr. Manhattan.

For 10 issues of Doomsday Clock, a small watchface has appeared on the bottom left of each front cover, and with each issue it has gotten one minute closer to midnight. And in the midnight position rests a Superman symbol. Surely nothing to worry about. Surely a sign of victory for our heroes. And in the opening pages of Doomsday Clock #9 Dr. Manhattan theorizes about 2 possible outcomes for the timeline of the DCU:

But Dr. Manhattan ending all existence isn’t really on the table, so let’s look at that other one. Let’s say something very bad happens to Superman, that he becomes so angry that he punches with enough might to kill even Dr. Manhattan. And let’s say that Dr. Manhattan has been actively manipulating multiple timelines, changing them but also sustaining them. What if the godlike being who is actively holding time together… suddenly dies? What would happen to time?

And let’s entertain the idea that Doomsday Clock isn’t the big continuity event that we all thought it was. What if it’s only the lead-in? The Countdown To The Big One? What comes next?

Well, we know that Geoff Johns‘ next project is The Three Jokers, and if you’ll recall Batman investigating that particular plot thread in the final pages of New 52 Justice League #50, on his batcomputer viewscreen we saw images of the pre-Crisis, post-Crisis, and post-Flashpoint Jokers. But a mini about 3 Jokers doesn’t sound like the center of a line-wide Crisis. And Tom King sure has had his hand in this timeline plot for a long, long time. Just as long as Johns, really.

Oh, and that bit about Gotham Girl cratering Batman? It sure would be a bad time to lose a hero that essential, just before a Crisis. And combining multiple timelines on the other end sure would be a convenient way to bring him back.

And, yes, I’m aware that Scott Snyder is on a press tour telling you all that Doomsday Clock will pass without ramification.

Scott Snyder is lying to you.