Welcome back to Bleeding Cool‘s review of AMC‘s Fear the Walking Dead, kicking off the show’s fifth season return with a look at season-opener “Here to Help.” With Dwight (Austin Amelio) coming aboard this season and a much-hyped change in tone and attitude, was the premiere able to walk(er) the walk after talking a lot of promising talk the past few months? More important, are we on step closer to proving our theory that the show will end up a “prologue” to the upcoming Rick Grimes (Andrew Lincoln) films?

In a nutshell? It’s a “pretty much” for the former, a cocky confirmation on the latter, and some other things in-between – as you’ll find in the following review of “Here to Help.”

Fear the Walking Dead season 5, episode 1 “Here to Help”: The group faces unexpected dangers when they land in uncharted territory in search of survivors.

● For me, child actors in the Walking Dead universe can be a serious case of “hit-or-miss.” For the sake of playing nice, I’ll avoid listing any “misses” and just say that Cooper Dodson‘s Dylan, Ethan Suess‘ Max, and Bailey Gavulic‘s Annie definitely fit in the “hit” category. After only a few minutes of screen time, I already wanted to know their backstory – definitely a thread worth following this season.

● I was expecting Alicia (Alycia Debnam-Carey) to be in a better place in her head by the time this season started, but that definitely doesn’t seem to be the case. That said, Debnam-Carey is more than ready to be the Madison/Rick Grimes this series needs.

● Opening credits animation is as impressive as always, taking place at the plane crash site with mixed storm clouds blowing through. Wondering if we might see this season’s opening credits give us a little more insight into how FTWD will connect with the upcoming Rick Grimes films because… it does!

● While we cover the connection between the two shows in more detail here, having Althea (Maggie Grace) be the catalyst for the potential crossover/pseudo-sequel makes sense on a number of levels – in particular, that “loner” aspect of her personality puts her in a position to be apart from the group. That said, they’re going to wonder what happened to her pretty soon so curious to see where this goes.

● Seriously? Luciana (Danay Garcia)? Can we find something more substantial to do with her character than just “getting angry” and “getting hurt”? An interesting character still in search of her defining story arc, I’m seriously hoping for her to be paid some serious storytime attention this season.

● Logan (Matt Frewer) is the partner of last season’s truck driver Clayone and the other owner of the denim factory – and just the type of personality the series needs to have and keep. On one hand, I can’t wait for Alicia to punch him in the face over the “sweetheart” line – but on the other hand? He has a point: it is his factory, and he did take the road least confrontational to avoid anyone getting hurt. That said, we still want to see him take one to the face – and credit Frewer’s performance for giving us someone who’s already proven himself to be more than just a one-dimensional “big bad.” I have a feeling he might end up being more than that – especially if Charlie (Alexa Nisenson) can find a way to get them back into the factory under Logan’s nose.

● Sorry, Fear fans: no Dwight (Austin Amelio) this week – or an in person Daniel (Ruben Blades), though to Strand’s (Colman Domingo) surprise he appears on one of Althea’s videos. Now this is an acting face-off I’m looking forward to – feel like Blades and Domingo are going to own the first episode they’re reunited in.

● Finally, while I know it’s only the first episode – this was not the “positive, uplifting start” we were expecting, at least not after the way it was promoted all pre-season. Where’s the “hope”? Collectively, they seem a bit more worse off than they were at the end of the fourth season.

● Question That Needs to Be Answered: Why didn’t they leave anyone behind to guard the factory?

So a strong start that teased some very interesting storylines still to come – just need to lighten up things a bit more if you don’t want it to become just a repeat of season 4. Now here’s a look at next week’s episode “The Hurt That Will Happen”…

Fear the Walking Dead season 5, episode 2 “The Hurt That Will Happen”: Morgan and Alicia meet a survivor; the group struggles to achieve their goal; Strand makes contact. 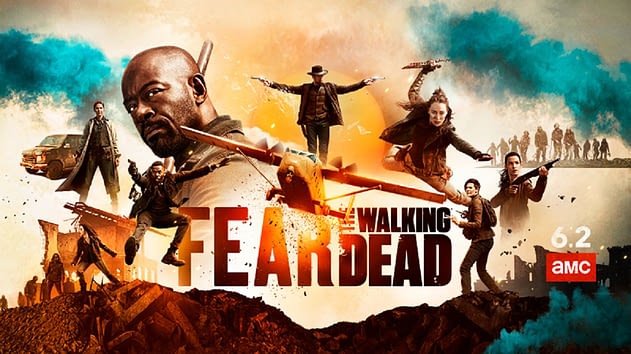 Heading into season 5 of Fear the Walking Dead, the group’s mission is clear: locate survivors and help make what’s left of the world a slightly better place. With dogged determination, Morgan Jones leads the group with a philosophy rooted in benevolence, community and hope. Each character believes that helping others will allow them to make up for the wrongs of their pasts.

But trust won’t be easily earned. Their mission of helping others will be put to the ultimate test when our group finds themselves in unchartered territory, one which will force them to face not just their pasts but also their fears. It is only through facing those fears that the group will discover an entirely new way to live, one that will leave them forever changed.

Nisenson, David, Blades, Amelio, Gavulic, Dodson, Suess, and Frewer join Dwight’s crossover comrade Morgan (Lennie James) on the upcoming season of The Walking Dead spin-off series, which has undergone some major changes over the past year. Jenna Elfman, Garret Dillahunt, Maggie Grace, Mo Collins, and Daryl Mitchell joined James on the series last season; with Alycia Debnam-Carey, Colman Domingo, and Danay Garcia the only original cast members heading into the fifth season. Daniel Sharman is reportedly reprising his role as Troy Otto, though how his character will come into play during the upcoming season is still unknown.