When Marvel Comics began teasing creative teams for what Bleeding Cool has told you is a Marvel #1000 anthology, C.B. Cebulski’s master plan to sell a million comics in August, there was a very glaring problem that was difficult to ignore. Marvel is a publisher that claims to reflect “the world outside your window,” but did their teasers really illustrate that?

The answer, sadly, was no. Because as anyone could tell from a cursory glance of the teasers, there was a very obvious pattern, something clearly not as well-represented as it should be.

Of course, we’re talking about stories written by Al Ewing.

For a long time, Marvel has had a severe lack of Al Ewing comics, only publishing 2 or 3 per month out of their whole lineup. And with Ewing represented on only one of 10 teasers we knew about as of Wednesday, fans hoping for better Al Ewing representation didn’t have very much to be hopeful about. It was a very unfortunate scenario, because how can you celebrate 80 years of Marvel Comics without including proper representation of the Al Ewings who helped build that legacy?

Thankfully, things did change for the better on Thursday, when Marvel creators unleashed a barrage of tweets promoting more creative teams under the #MarvelComics hashtag, and finally, the publisher made clear that it supports the inclusion of Al Ewings in comics by revealing nine additional Al Ewing teasers, adding to the already-announced Al Ewing and George Perez collaboration for a total of ten Al Ewing stories in Marvel #1000.

Personally, we think that Marvel deserves recognition for addressing this deficiency, though it’s also clear that Marvel still has a long way to go. With that in mind, we imagined a conversation we might have with Marvel Editor-in-Chief C.B. Cebulski if he were actually willing to talk to us.

“For too long there have not been enough Marvel Comics by Al Ewing,” Cebulski told us. “Today, we seek to rectify that a little. Eventually, we hope to reach a point where half of all Marvel Comics are written by Al Ewing, but until that day, this is a step in the right direction.”

“When we paid an intern zero dollars to hastily photoshop these teasers using state-of-the-art Pentium computers, we knew that one of the first questions fans would have would be why there were so few Al Ewings in the lineup,” said Cebulski. “But everybody just needed to be a little patient, except for us, because we needed these teasers completed in five minutes or less. Now that more teasers have been released, I hope that everyone sees there was a plan for Al Ewing all along, unlike for these teasers, which have literally no design aesthetic whatsoever.”

“Just think of all the young Al Ewings out there, seeing Al Ewing writing so many stories in Marvel #1000, and finally realizing, that they, who are also Al Ewing, could one day write a bunch of Marvel comics too,” Cebulski continued. “It fills my heart with joy. *burp* Oh, my bad, actually it was just indigestion.”

We applaud Cebulski, or Akira Yoshida, or whatever he’s going by these days for his honesty and commitment to trying harder.

Stay tuned to Bleeding Cool for more on Marvel #1000, which you can read all about here at our Marvel August Visitors tag archive. 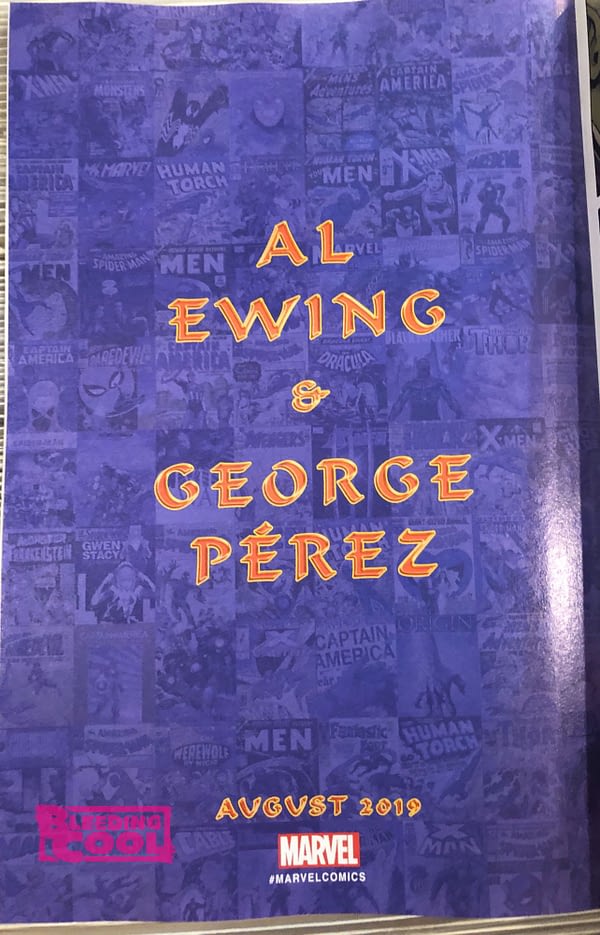 Oh yeah, we almost forgot. On a completely unrelated note, only seven of the teasers featured any women, but hey, baby steps. First, Marvel needs to correct the Al Ewing problem, and later they can worry about gender equality.

About News with Benefits

Why let facts get in the way of a good story? News with Benefits is just like the actual news, but more interesting because it’s embellished. Yes, it may feature made-up quotes, wrong assertions, and completely baseless speculation, but in a way, isn’t that more honest than the shameless buttkissing and corporate shillery you often find in the “real” news? Don’t answer that.

News with Benefits was pioneered at toilet-themed comic book news and opinion website TheOuthousers.com, which is sadly now defunct, but its stench lives on thanks to the support of your clicks and outraged comments.

Popular This Week in Satire