‘Ere, wanna play the latest game from Japan, squire?  It’s a big hit there, and it’s crossing the pond this summer.  It’s not a First-Person Shooter, not a Role-Playing Game with willowy, long-haired swordsmen that look like girls and swing weapons bigger than them, not a side-scrolling fighter, nooo.  It’s CATHERINE, innit?

CATHERINE is a new adventure game from Atlus, the company that made the SHIN TENSEI MEGAMI and PERSONA series but unlike those, this one is actually aimed at adults.  Now, it’s rare enough for a AAA console game to not be one of those genres listed above that the Japanese gaming industry has settled into.  It’s even more rare to have one whose story isn’t aimed at teenage boys and making them feel strong and powerful.

In CATHERINE, you control a feckless dude in his late 20s named Vincent who’s fretting over his girlfriend Katherine putting pressure on him to marry her, especially after she tells him she’s pregnant.  So what’s a feller to do except, well, have a one-night stand with a sexy, unpregnant chick named Catherine to take his mind off his anxieties and get entirely new ones instead?  Next thing he knows, Vincent finds himself having awfully real Kafkaesque nightmares every night where he’s stalked by demonic sheep and is in danger of turning into one of them, facing off giant wailing babies and so on.  He comes to dread going to sleep every night even as his guilt and paranoia get worse during the day when he has to deal with his friends, Catherine and Katherine, and his suspicion that he might be the latest victim-to-be in a string of mysterious deaths around the city where the deceased are men in their 20s who are all found dead with looks of abject terror on their faces.  He’s also going to have to deal with Katherine finding out about his affair and whether Catherine might be a serial killer, but he can’t resist the sex.

CATHERINE is interesting for a lot of reasons, one of which is that it’s a hit in Japan and the game is about playing as a bloke going through a whole checklist of male anxieties like marriage, sexual terror, fear of women, fear of sex, fatherhood as emasculation, the loss of control over one’s life and being led by the dick.  It’s all very Freudian.  To play the game may require a certain masochistic streak, and I’m fairly sure that male gamers outnumber female gamers in Japan as much as everywhere else, what does this say about the guys who bought it?  That this is a game all about feeling helpless and hapless and that it has sold very well in Japan raises a bunch of questions in my head, especially in light of the fact that marriage and birthrates have been steadily dropping in Japan for at least a decade now.  Are Japanese blokes playing this game and getting some kind of catharsis or validation if they decide to avoid marriage or women? 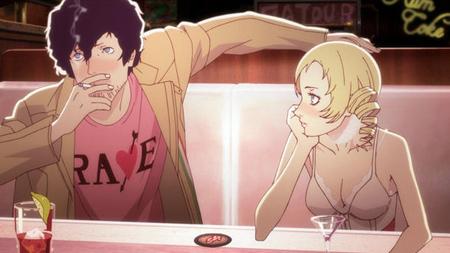 There are a lot of indications that CATHERINE was designed to be sold in the West on top of Japan: its title is English, all the characters have Western names, and the setting is Any American City.  Atlus must be hoping for some success in the West on top of Japan, since there are hundreds of games released every year that never make it out of Japan.  A game like this is seriously high concept in the whole gaming industry, not just in Japan.  The only other recent adult game that doesn’t feature armoured hardasses with guns has been HEAVY RAIN, and there doesn’t seem to be another adult-oriented game announced for the Western market anytime in the near future.  The whole games industry is probably watching to see whether it makes any impact in sales.

And what are gamers in the West going to make of it?  I know hardcore gamers are already gagging to play it.  I want to play it.  It sounds like it turns the story of being male, not ready to marry and settle down and screwing up to as an act of self-destruction into an epic, mythical tale.

I wonder what women will make of the game. 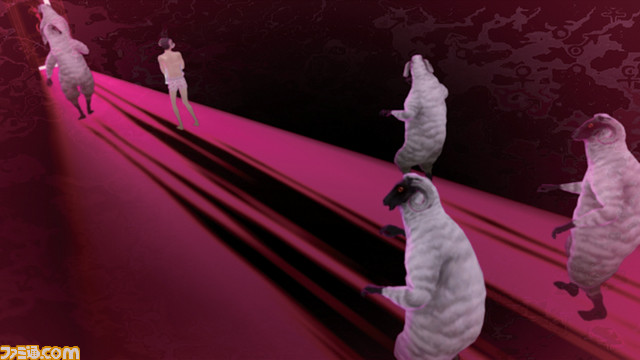 CATHERINE will be released on Xbox 360 and PS3 in the US in July.

Follow the official LOOK!  IT MOVES! twitter feed at http://twitter.com/lookitmoves for thoughts and snark on media and pop culture, stuff for future columns and stuff I may never spend a whole column writing about.