I tried to think of a clever title for this week’s column, but really, nothing can beat the actual title of the movie itself. Yes, there really existed a movie called NICE GIRLS DON’T EXPLODE. No one seems to remember it or talk about it now.

Why am I talking about it now? Why not? It suddenly popped into my head in one of those unexpected Proustian moments that’s probably a sign of progressive brain damage.

Put simply, NICE GIRLS DON’T EXPLODE is like the writers of ARCHIE comics and Tim Burton doing a sitcom remake of CARRIE. There’s this anxious, repressed teenage girl named April who would love to get with boys but can’t because anytime she gets any sexual attraction or arousal, her mind sets things on fire. She has to carry a little fire extinguisher with her when she goes out on a date because things do spontaneously combust wherever she goes. Her mother has taught her that she needs to keep it in her pants or risk setting some hapless boy aflame. Then her childhood friend Andy moves back and falls in love with her. Thus, plucky Andy has to unravel the mystery behind April’s mysterious fiery powers in order to have a happy ending with her, but that pits him against April’s fanatical mother, who will stop at nothing to protect her baby girl, even if it means landing him in a mental asylum. And so on. It’s farce. It’s even got Wallace Shawn in it.

NICE GIRLS DON’T EXPLODE was made in 1987 by New Worlds Pictures, a company originally formed by Roger Corman in 1970 but sold off in 1983. New Worlds tried to expand into television and other media, including buying Marvel Comics in 1987 but money problems made them sell Marvel to Ron Perelman in 1989, where comics history took its course in the next decade, which is now well-documented. I saw NICE GIRLS DON’T EXPLODE when I were a lad back in the late 80s. Hey, who wouldn’t rent a movie called NICE GIRLS DON’T EXPLODE? It seemed like every video rental shop in London had it along with STRIPPED TO KILL, CORRUPT (the only movie to ever co-star John Lydon and Harvey Keitel), FEAR CITY (a middling Abel Ferrera New York thriller that was actually shot in New York) and the Cannon productions of CAPTAIN AMERICA and various other sleazy straight-to-video titles that no one remembers anymore. The thing about the 1980s is that there was a lot of awful shit about, but a lot of it was far from cookie-cutter generic. There was such a sense of wild abandon that you could often find something really odd or surreal in the crappiest video you rented from the shop. NICE GIRLS DON’T EXPLODE wasn’t a T&A sleaze-fest. It was actually a rather sweet and well-timed romantic comedy with surprising conviction in its deadpan humour. 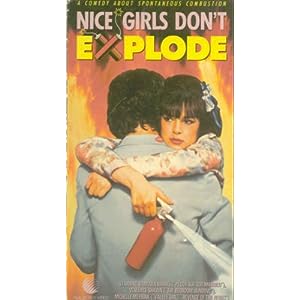 NICE GIRLS DON”T EXPLODE is one of those odd little movies that just fell by the wayside. It wasn’t overly nutty or flashy despite the candy-colours and comic book framing. It never gathered even a minor cult following. The ultimate teen cult movie from the 80s would be HEATHERS with its full-mouthed black comedy and political subtexts, not to mention future-stars-in-the-making Winona Ryder and Christian Slater, even if this was still the best movie they ever made. It doesn’t have people creating websites devoted to it. Wallace Shawn was already well-known and is still well-known, but the director Chuck Martinez seems to have vanished after a brief career directing episodic TV and acting guest spots. Star Michelle Meyrink was best known for playing cute nerd girls in movies like REAL GENIUS and REVENGE OF THE NERDS (which I still haven’t seen) before eventually retiring from show business and settled into married life and Zen Buddhism in Canada. The movie is now out of print. It never came out on DVD except maybe in Germany. It’s so obscure that the only images I could find for it were the three you see here.

It’s not a movie that’s going to go down in history or change Cinema as We Know It, but the fact that it exists is testament to the 1980s as one of the last decades of bizarre, unpredictable and excessive creativity that we haven’t really seen in the Arts ever since.

Follow the official LOOK! IT MOVES! twitter feed for thoughts and snark on media and pop culture, stuff for future columns and stuff I may never spend a whole column writing about.

Brendon’s note: Just a couple of additions from my sick bed. In fact, I talk about this film relatively often. There’s even a Hey U Guys podcast from last year in which I recommend it and discuss it a little, and explain something of where Chuck Martinez is these days and what’s he’s doing. And the film is still available on DVD in the UK